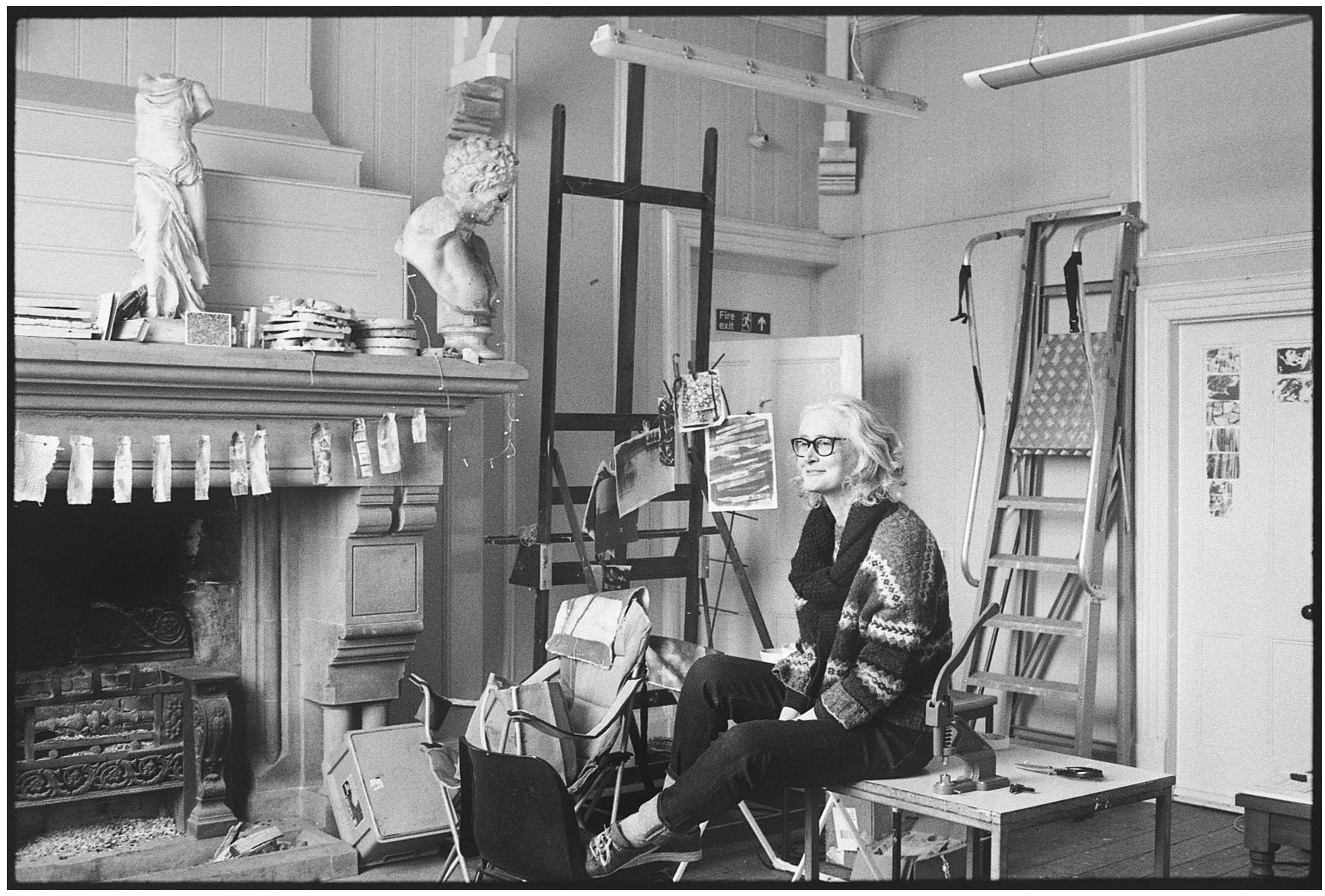 I’m a visual artist living in Friockheim and most of the time I work in a wee room at the front of my flat. It was originally Angus’ smallest hairdressing salon but it’s really a glorified cupboard with a sink and some shelves that I share with a cat bed, a litter tray and assorted useful things like walking boots and an ironing board. You can see it here in the red photo. I block the light with a red curtain when I’m preparing cyanotypes.

Cyanotypes are an early type of photograph: paper or some other material is coated with a light-sensitive chemical solution, objects or negatives are placed on the material and exposed to UV light. Anything that light can’t pass through up will stay white and anything that is exposed to light will turn blue, cyan blue to be precise. Traditional architectural blueprints used to be made this way.

“Blueprints For Arbroath” is my cyanotype project for Arbroath 2020+1. I had originally intended to make quite small, A4 sized prints but when I was given the chance to work in the Patrick Allan Fraser studio at Hospitalfield, my ideas began to  grow, developing on a much larger scale than was ever possible in my tiny cat litter cupboard.  After spending a couple of months in a space where I could think, plan and make a lot of mess, my final cyanotypes, which are printed onto linen fabric turned out to be than thirteen times larger than my original idea.

The project is inspired by history and memory, the idea that no two people will remember the same thing in exactly the same way and that events in history are viewed differently depending on the circumstances of the viewer.  In particular I have been thinking about the history of linen manufacturing in Arbroath in the 18thand 19thcentury, and of the different people and places involved in the process of making a type of linen called Osnaburg.  Arbroath was the first Scottish town to create Osnaburgs and the story of this cloth shows how connected the town was with the rest of the world.  Osnaburgs were first developed in Germany, the flax for the Scottish linen would probably have come from Russia, the merchants who bought the finished items could be in Dundee, London or Liverpool.  The most common final destination for the Osnaburg linen was the West Indies where it was used to make clothing for the thousands of enslaved people working on plantations.  Right in the middle of this vast transnational story are the men, women and children of Arbroath who worked in the linen industry as flax dressers, hecklers, spinners, weavers and bleachers. These many different memories and experiences create a complex, layered history.

My linen cyanotype prints are made from negatives which I make made from digital photographs. The negatives are printed on to transparent paper which allows me to rip up and re-assemble the images and to play around with size, length, whether the negative is smooth, or if I have crumpled or folded it.  Just like my ideas about history – the image is different depending on its circumstances.  Being in the studio allowed me to experiment and then hang the work all over the place, so that I could live with it for a while before deciding what would be included in the final selection.  My time there coincided with a Scottish winter where sunshine was more of a dream than a reality. I came prepared for this and brought my own sunshine in the shape of blacklights – the sort of thing that nightclubs use to create a UV glow.

Having a place that was all mine but was also part of a larger creative community, including the other artists who had shared the studio in the past, was wonderful.  It was the perfect environment in which to develop new skills and grow in confidence and it felt like absolutely the right place to be.