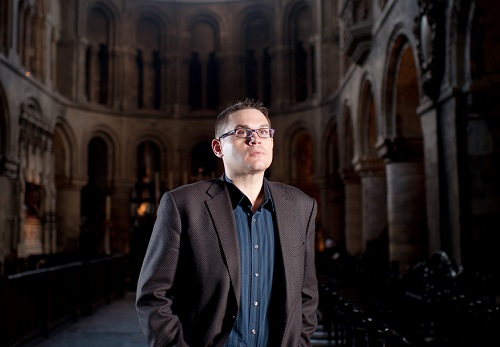 Paul Mealor is one of the world’s most ‘performed’ living composers and has been described as, ‘the most important composer to have emerged in Welsh choral music since William Mathias’ (New York Times, 2001) and his music is, ‘marked by something outside of himself that is beautifully spatial and evocative of landscape… it illuminates both our past and our future’ (The Guardian, 2011).

Paul Mealors achievements include topping the music charts at Christmas in 2011 with his piece “Wherever You Are”, which was written for The Military Wives Choir and Gareth Malone, and was nominated for Best British Single in the 2012 BRIT Awards.

In 2012 an estimated global audience of 2.5 billion people watched on as his motet, Ubi caritas, was performed by the choirs of Westminster Abbey and Her Majesty’s Chapel Royal, at the Westminster Abbey wedding of Prince William and Kate Middleton, known as the Earl and Countess of Strathearn in Scotland.

Topping the Classical Charts for six weeks with his bestselling album, ‘A Tender Light’ (featuring Tenebrae Choir and the Royal Philharmonic Orchestra) in November 2011, he also broke records by being the first classical composer to hold both the classical and pop chart No 1’s at the same time in December 2011, securing the UK Christmas No 1 with his piece for The Military Wives Choir and Gareth Malone, ‘Wherever You Are’. ‘Wherever You Are’ entered the UK Pop Singles Chart at number 1 on 19th December, selling over 556,000 copies in one week, more than the rest of the Top 12 combined, and was nominated for Best British Single in the 2012 BRIT Awards. It has been named, by the Official Charts Company as, the fastest selling single since Elton John’s ‘Candle in the Wind’. Also, in April of 2012 Mealor was voted the nation’s favorite living composer during the UK Classic FM Hall of Fame.

Born in St Asaph, North Wales in 1975, Paul Mealor studied composition privately as a boy with William Mathias and later with John Pickard, and at the University of York (BA Hons, 1997, PhD, 2002) and in Copenhagen with Hans Abrahamsen and Per Nørgård. His music has been commissioned and performed at many festivals and by many orchestras and choruses and has been broadcast on every major TV and Radio station throughout the world. Since January 2003 he has taught in the Music Department at the University of Aberdeen where he is Professor of Composition.

Mealor was catapulted to international stardom in April 2011, when 2.5 billion people (the largest audience in broadcasting history) heard his Motet, Ubi caritas performed by the choirs of Westminster Abbey and Her Majesty’s Chapel Royal, conducted by James O’Donnell at the Royal Wedding Ceremony of His Royal Highness Prince William and Catherine Middleton (now TRH The Duke & Duchess of Cambridge) at Westminster Abbey. It since topped the Classical singles charts in the USA, UK, Australia, France and New Zealand.

In July 2011, Mealor signed to Decca Records and signed a publishing deal with Novello & Co. His first album for Decca, A Tender Light – a collection of sacred anthems recorded by Tenebrae and the Royal Philharmonic Orchestra – spent six weeks at No 1 of the Specialist Classical Charts. He is currently preparing his second album for Decca and has contributed new works to a number of other Decca albums, including his song In My Dreams for X factor star Jonjo Kerr, which entered the pop charts at number one, knocking Bruce Springsteen off the top spot; De Profundis for the St Petersburg Chamber Choir on the album Tranquillity (which also made No 1 in the Classical Charts in August 2012), and the first ever musical setting of St Francis’ prayer, You Are The Holy Lord God for Friar Alessandro’s debut album.

Mealor wrote a number of works for HM Queen Elizabeth II’s Diamond Jubilee. He has composed an opera, ‘74 Degrees North’ (2010) for Scottish opera and three symphonies – No 1 ‘Passiontide’ is for choir, soloists and orchestra (2009-2015); No 2 ‘Sacred Places’ (2016) for the NEW Sinfonia and, No 3 ‘Illumination’ (2018) for the BBC National Orchestra of Wales. His Euphonium Concerto (2017) was commissioned and premiered by David Childs and the Royal Philharmonic Orchestra at the Last Night of the Welsh Proms, 2017, conducted by Owain Arwel Hughes CBE and recorded by Childs and the BBC Philharmonic (Chandos; 2019) and he composed a special work ‘Twilight Falls on Temple View’ to mark the 25th birthday of Classic FM and the 10th anniversary of the founding of Dumfries House in August 2017. His short, Requiem was featured at the Welsh National Eisteddfod in 2017 by the BBC National Orchestra of Wales. His ’Requiem: The Souls of the Righteous’ was premiered by the National Youth Choir of Scotland and the Royal Scottish National Orchestra, September 2018 in Edinburgh prior to its USA premiere by DCINY at Carnegie Hall, New York on November 11th 2018.

Mealor is the first President of Ty Cerdd – Wales’s National Centre for music making and Patron of the Welsh Music Guild. He is Vice-President of the Llangollen International Eisteddfod and the North Wales International Music Festival and was the Curator of JAM on the Marsh in Kent (2015-17) and Composer in Residence with Canada’s top professional choir, Pro Coro Canada. He has received many awards and honours for his music including Honorary Fellowships from Bangor University (2013) and Glyndwr University (2012) in Wrexham and the Glanville Jones Award, from the Welsh Music Guild, for his outstanding contribution to music in Wales (2013). He was appointed a Free Burgess of The City of Aberdeen in 2012 by The Lord Provost of Aberdeen, and is President and Patron of many organisations. In January 2018, HM Queen Elizabeth II appointed him an Officer of the Venerable Order of St John (OStJ). In May 2019 he was appointed to the Order of the Samurai (OSS) at Great Shogun Level and in March 2020 he was admitted as a Commander of the Catholic Order of St Lazarus of Jerusalem (CLJ).