The Bas Relief sited outside Arbroath Abbey tells the story of Arbroath and its people, from the construction of the world-famous Abbey to the Bell Rock Lighthouse, one of the Seven Wonders of the Industrial World. The sculpture presents a timeline spanning from early Pictish settlements to the modern day and depicts the industries which have shaped our town and our people, including fishing, agriculture, weaving and engineering.

The new commissioned public sculpture is sited on Abbey Street. This stunning sculpture will provide a lasting reminder of the legacies Arbroath has given the world, including the Declaration of Arbroath. With accompanying online youth heritage project you can listen to stories told by local young voices accessed by QR code.

Arbroath Guildry has gifted a large bronze Bas Relief sculpture to the people of Arbroath for the celebrations of the 700thanniversary of the Declaration of Arbroath.

Alan B Herriot’s work focuses on portraying figures from history, literature and legend and he has produced sculptures for a variety of major Heritage Conservation bodies.

Thanks to the support of Angus Council and Historic Environment Scotland, the Bas Relief will be sited in front of Arbroath Abbey. As well as providing a focal point for local people and visitors alike, Arbroath Guildry’s Bas Relief will be on view at all times, providing an outstanding timeline of the town and a lasting reminder of the legacies Arbroath has provided to the world over the centuries.

Arbroath school pupils took part in a writing competition to tell the history of their town. The sculpture will be accompanied by digital sound interpretation narrated by local young people accessed on-site through a QR code. Listen now on the link below: 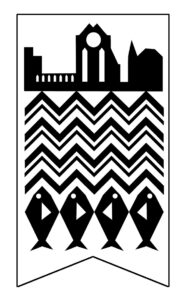 Written and told by Young People of Arbroath

The Arbroath Guildry aims to promote civic pride, encourage community spirit and support local organisations and individuals throughout Arbroath and the surrounding area.

In addition we would like to thank Angus Council for their ground work for the project and Historic Environment Scotland for providing the sandstone and will build the plinth for the project.

As part of the ceremony four young Arbroathian residents unveiled the work and below is the welcome, introductory speech:

On behalf of Kate, Holly, Logan and I, we as the youth of Arbroath are honoured and privileged to be invited here today by Arbroath Guildry to unveil this symbolic and momentous Bas Relief.

We would like to thank the Arbroath Guildry for gifting this new historic landmark to our town. Not only will this iconic monument continue to educate the future generations on the growth and evolution of Arbroath, but it will commemorate our town’s contributions to the wider world.

We are indebted to Mr Alan B Herriot, a top sculptor, for his time and skill in producing what will be a lasting legacy here in front of the Arbroath Abbey – something which is still famously telling the story of our community’s past.

Today marks another significant day in the history of Arbroath. There is no better time to reveal such a precious addition into our community as the 700thanniversary of the declaration of Arbroath is approaching. We feel extremely proud that the eyes of the world will turn to Arbroath to watch and join in on what is a memorable celebration of our history.