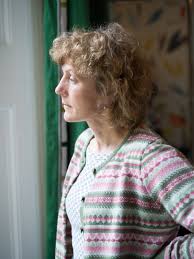 Lesley Harrison grew up in Dundee, lived for a while in Sutherland and Orkney, and has now resettled on the north east coast. She has worked and travelled in some of the world’s more remote places.  She has held residencies in Svalbard, Iceland and Greenland, and a year spent in Mongolia and China influenced her second poetry pamphlet, One Bird Flying; a later collaboration with Orkney artist Laura Drever won the 2012 Callum Macdonald Memorial Poetry Pamphlet Award. Blue Pearl, her first American collection,was published by New Directions in 2017.

Her poems have been published in Poetry Ireland Review, theAntigonish Review, Ice Floe, Magma, the Island Review, and other places. Her poetry pamphlets include Ecstatics: a language of birds (Brae Editions, 2011), a collaboration with Orkney artist Laura Drever, and One Bird Flying (Mariscat, 2009), a response to the journals of Marco Polo. She has held writing residencies in Iceland, Greenland, and Svalbard. She now lives on Scotland’s Angus coastline. Blue Pearl (New Directions, 2017) is her first collection to appear in the United States.

For Arbroath2020+1 Lesley Harrison has devised CETACEA a collaborative performance with viola-player Katherine Wren, and clarinettist Alex South, on the theme of the voyage of the 19thcentury whalers to the polar seas, and the cultural aftermath of the whaling industry. It explores their collective interest in animal song and the cultures and music of the North Atlantic. The trio’s music and words meet with marine biologist Michael Scheer’s recordings of pilot whales and Alexander and Nicole Gratovsky’s underwater footage to create the piece CETACEA.