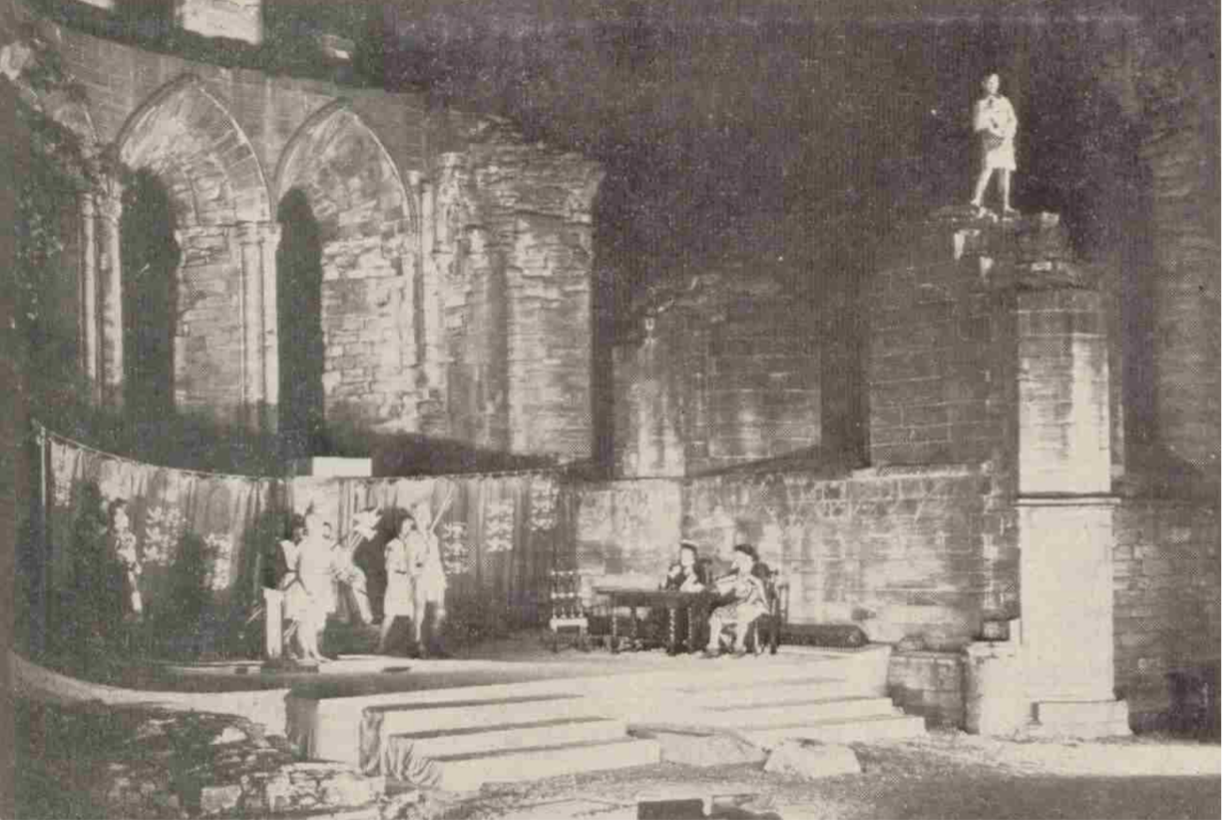 An article written and researched by Patrick Moran for the online series The Making of a Pageant: 1947-2005.

The string of Arbroath Abbey Pageant performances from 1947 to 1956 can be credited for affording Arbroath’s status as the UK’s pageant capital. An innovation in 1951 – Performance Under Illumination – further cemented Arbroath’s place on the pageant map. Under Pageant Masters Frank Thornton and George Shepherd, the Pageants, and the ancillary events of ‘Pageant Week’, grew to be a much-anticipated feature of the town’s holiday season.

My archive- and interview-based study of the early Abbey Pageants pieced together a nested assemblage of pageant atmospheres: first, the festive atmosphere of Pageant Week, and second, the enchanting atmosphere of the pageant performances themselves – especially those taking place at night-time under illumination.

By its third year, in 1949, Pageant Week was praised in local press for returning the ‘pageant spirit’ to Arbroath. The scene across the town was described by the Arbroath Guide:

The festive air of Pageant Week was punctuated by a raft of community events, including most prominently the performance of an ‘old-time fisher wedding’ at the Drill Hall…

…and a Grand Historical Procession of Pageant performers, bands, and floats.

The festive spirit of each successive Pageant Week carried its own unique quirks. In 1952, for instance, an anonymous donor gifted a substantial prize for the best-groomed horse and harness featured in the Grand Historical Procession. Messrs Thos of Muir, Son & Patton Ltd. was the lucky winner of the main prize. Embellished by these kinds of niceties, Pageant Week was more than simply a tourist innovation or a straightforward commemoration of the Declaration of Arbroath: it was a vibrant expression of community togetherness bathed in an atmosphere of post-War festivity.

Nested within Pageant Week lied, of course, the Abbey Pageant performances themselves. It was at the illuminated performances from 1951 that distinctly enchanting atmospheres were engineered. Pageant-goers often spoke of being immersed in the scene of King Robert the Bruce and his Barons signing the Declaration of Arbroath:

The enchanting quality of the pageants under illumination was owed to several atmospheric generators, including the use of skilful up-lighting to rebuild the Abbey walls against the backdrop of the gloamin’, and the ghostly appearances of the commentator of the day, as if from the mists of the past.

Whereas by day the town was consumed with a festive pageant spirit, by night the performances transported pageant attendees to an eerie time past. Innovative arrays of spotlights and floodlights were integral, along with the red sandstone fabric of the Abbey itself and, on many an occasion, a haar rolling in off the North Sea. The words of some more recent pageant attendees spoke clearly to this sensation; one which many readers may also recall from illuminated pageant performances in their day:

This article has been written and researched by Patrick Moran after he wrote his Undergraduate Dissertation at Cambridge University on Atmosphere and Illumination at the Arbroath Pageants on this subject and interviewed a number of people who attended the Pageants.